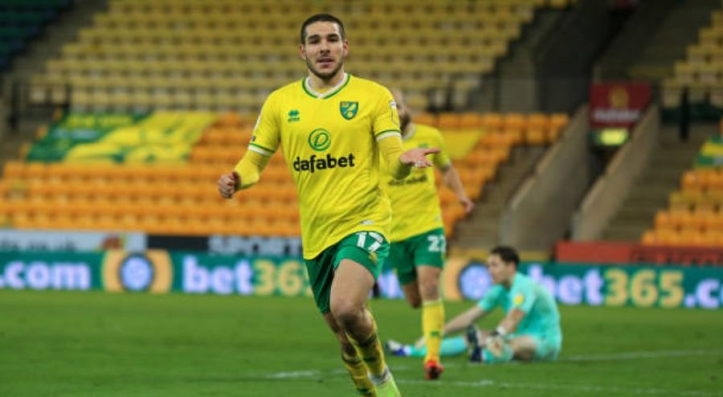 Norwich City bounced back from two consecutive draws against Blackburn Rovers and Preston in emphatic fashion this week as they destroyed Huddersfield 7-0 in the Championship.

Teemu Pukki scored a hat-trick, but the star of the show was undoubtedly Emiliano Buendia, who scored a perfect 10 FC Rating for his performance which included a goal plus a hat-trick of assists.

The victory allowed Norwich to extend their lead at the top of the table to eight points after Watford could only manage a 1-1 draw away at Middlesbrough.

Ismaila Sarr gave the Hornets the lead in that one, but they were pegged back with 12 minutes to go after an equaliser from Yannick Bolasie.

Norwich could potentially earn automatic promotion to the Premier League this weekend.

Swansea‘s slim hopes of gaining automatic promotion by finishing first or second took another blow as they were defeated 1-0 at home by Preston. They are on a dreadful run of four losses in a row.

Brentford, too, are faltering though as they recorded their fourth draw in a row after a dismal 0-0 stalemate against Birmingham. The Bees are now on 70 points, nine points adrift of Watford but with a game in hand.

The race for the playoffs continues to be as tight as ever, as between Brentford in third and Bournemouth in seventh there is a difference of just five points.

Barnsley, Reading, and Bournemouth all won in the latest round of fixtures to keep themselves in playoff contention.

Down at the other end of the table, there are still some big clubs who are too close to the relegation zone for comfort.

With at least six games remaining for most teams in the league, there is 10 points between Derby County in 18th and Wycombe in 24th.

Within that group at hte bottom, Wycombe, Sheffield Wednesday and Coventry picked up potentially vital victories against Rotherham, Cardiff, and Bristol City respectively.