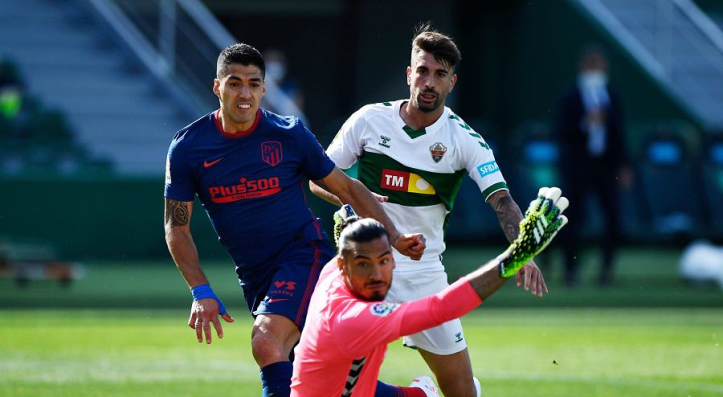 The pressure is back on Barcelona in the incredible race for Primera Division title glory after Atletico Madrid and Real Madrid both earned narrow and vital victories on Saturday.

Their triumphs did not always look likely, but do mean Barca sit five points behind leaders Atletico and three behind Real Madrid going into their game in hand at Valencia on Sunday.

Sevilla (70 points) are not out of the title race either. They sit fourth and do not play until a home Monday clash against Athletic Bilbao.

Atletico had fallen to a costly 2-1 defeat at Athletic last week, only to get a reprieve in midweek when Barcelona were beaten by the same scoreline at home to Granada.

There were almost more points dropped for Atleti in their latest outing.

Marcos Llorente gave them a first-half lead which ultimately proved decisive, though Elche captain Fidel missed a penalty in second-half stoppage time after the goalscorer had handled in the box.

Real Madrid were more in control of their match with Osasuna but it looked like they were in for a frustrating night too.

The match was level and it looked like they would have to settle for a point until man-of-the-match Eder Militao headed in with 14 minutes left, with Casemiro adding a clinching second goal soon after.

Barca came into their Granada match at Camp Nou with the title in their own hands.

Everything was going to plan when Lionel Messi fired them into a first-half lead, but the collapse in that match followed by these wins for the Madrid clubs mean they are now in a vulnerable position heading to Mestalla.

That means only one point separates the teams sitting 16th to 19th in the standings, so it is not only the top of La Liga that is poised for a thrilling conclusion.

Celta Vigo, meanwhile, are up to ninth after beating Levante 2-0.