Who, back in 1921, could have dreamt that someone born in that year would one day fly in space? Aviation was still in its relative infancy, the fastest speed recorded as the year dawned being 194mph or 313kph. But on 18 July John Glenn entered the world, became a US Marine Corps fighter pilot and in 1962 as one of NASA’s original team of astronauts orbited the earth three times.

He became a hero, and so too in a more earthbound manner did eight athletes, born in 1921, who would find fame as Olympic champions or world record-breakers.

On New Year’s Day no less, Ali-Mimoun Ould Kacha was born into a poor Arab-Berber family in Le Telagh, a small town in north-western Algeria, in those days a part of France. A promising young runner, he joined the French army in 1939 and fought in France, North Africa and Italy including the notorious Battle of Monte Cassino in 1944. It was there that he sustained such a severe shrapnel wound to his left leg that American doctors considered amputation. Mimoun refused and fortunately a French surgeon saved his leg.

After leaving the army in 1946 he moved to Paris, changed his name to Alain Mimoun, worked as a waiter at the Racing Club de France and resurrected his running career, ranking second in France at 10,000m that year. The following season he was the nation’s No.1, although ranked only 27th in the world with 31:21.0. But such was his progress in 1948 that at the London Olympics he finished second to the great Emil Zátopek, albeit nearly 300 metres adrift, in 30:47.4.

At the International Cross Country Championships, an event not contested by Zátopek, Mimoun reigned supreme, winning the individual title four times between 1949 and 1956 and leading France to team honours six times between 1946 and 1956.

Perseverance paid off, though, and at the 1956 Olympics in Melbourne, Mimoun, then aged 35, ran his first marathon … and won the gold medal, with an unfit defending champion Zátopek sixth. He became the first person of North African origin to receive the Legion of Honour and when he died in 2013, aged 92, he was recognised as France’s athlete of the 20th century. 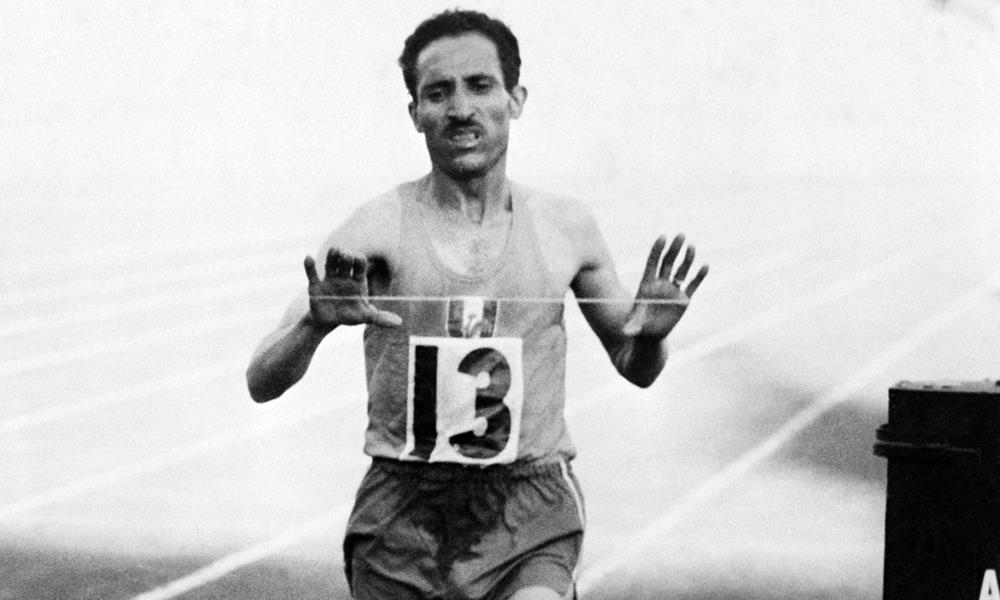 Another early arrival in 1921 (5 January) was US sprint ace Harold Davis, one of those unfortunate stars who, because of the cancelled Games of 1940 and 1944, never had the opportunity to perform on the Olympic stage.

Very quick from an early age, he was only 17 in 1938 when he clocked 9.7 for 100 yards, while the following year he ranked equal sixth in the world over the straight 220 yards with 21.0. In 1940 he ran 9.5 for second on the world list but more impressive still were his three world-leading marks of 10.3 for 100m. He would surely have been favourite for the Olympic gold medal had the Games taken place.

His greatest year turned out to be 1941 when in a heat at California’s Compton Invitational he equalled Jesse Owens’ world record of 10.2 into a 0.9m/s wind. He also ran the year’s fastest legal straight 220 yards time with 20.5, not to mention a 20.2 timing which would have shaded Owens’ official world record of 20.3 had he not been blown along by a 4.0m/s wind.

He remained king of the sprinters in 1942 with a 9.4 100 yards which would have equalled the world record but was not accepted by the IAAF as he used a type of starting blocks that had not been officially approved. He also topped the straight 220 yards list with 20.4. In 1943 the ‘California Comet’ bowed out from elite competition with times of 9.5, 10.3 and 20.2w.

During the four seasons, 1940-1943, he went unbeaten at 220 yards and lost only once at the shorter sprint. That one defeat was to Barney Ewell in the 1941 AAU 100m – and yet that might have been his greatest run. A notoriously sluggish starter, he was three metres behind Ewell at halfway and yet lost by inches in 10.3. Davis died in 2007, aged 86.

Another brilliant US runner who, like Davis, had no opportunity even to represent his country, was Grover Klemmer, born on 16 March. As a 19-year-old he clocked 47.0 for 440 yards for equal third place on the 1940 world list, while the following year he tied two world records in the space of four weeks. First he matched Ben Eastman’s 1932 timing of 46.4 for 440 yards, and followed up with a slightly superior 46.0 400m when winning a closely contested US title, thus equalling Rudolf Harbig’s 1939 record. 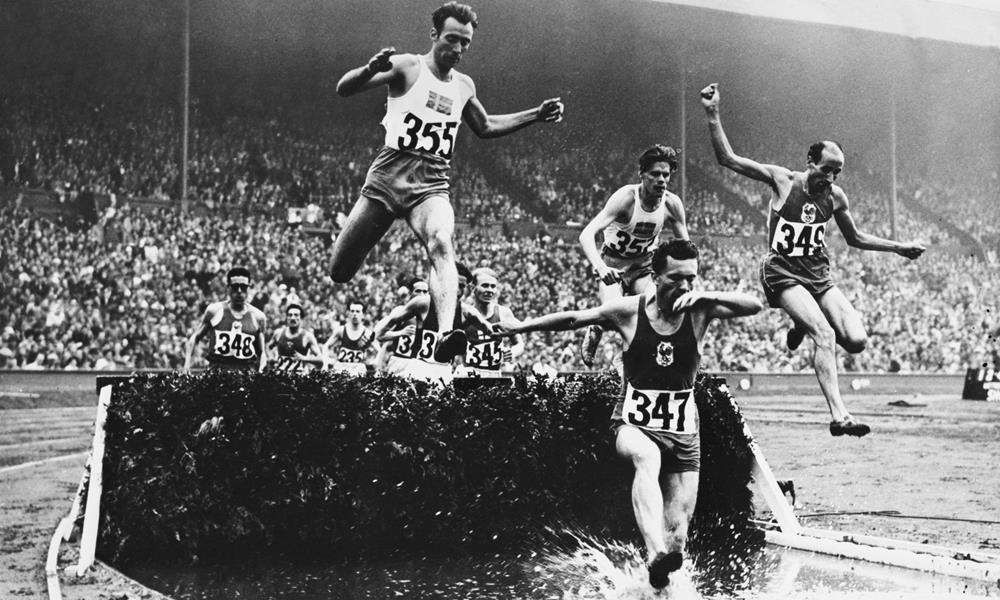 Thore Sjöstrand (born on 31 July) not only won the steeplechase in 9:04.6 but led Swedish runners to a sweep of the medals, finishing more than 20 metres ahead of the unofficial world record-holder Erik Elmsäter, who in 1944 had become the first man to break nine minutes.

A far more noticeable track winner at Wembley was Belgium’s Gaston Reiff (born 24 February). His victory in the 5000m was one of the most talked about happenings at the Games. After Emil Zátopek created an army of new fans by running away with the 10,000m, he had great support when he lined up on the rain-sodden track for the 5000m final three days later. At the bell the race looked a foregone conclusion for Reiff as he had drawn some 40 metres clear, but Zátopek was not down and out for he burst into a frenzied sprint and in a desperately exciting finish failed by only a single stride to catch Reiff, (Olympic record 14:17.6 to 14:17.8) who became the first Belgian athlete to win an Olympic title. 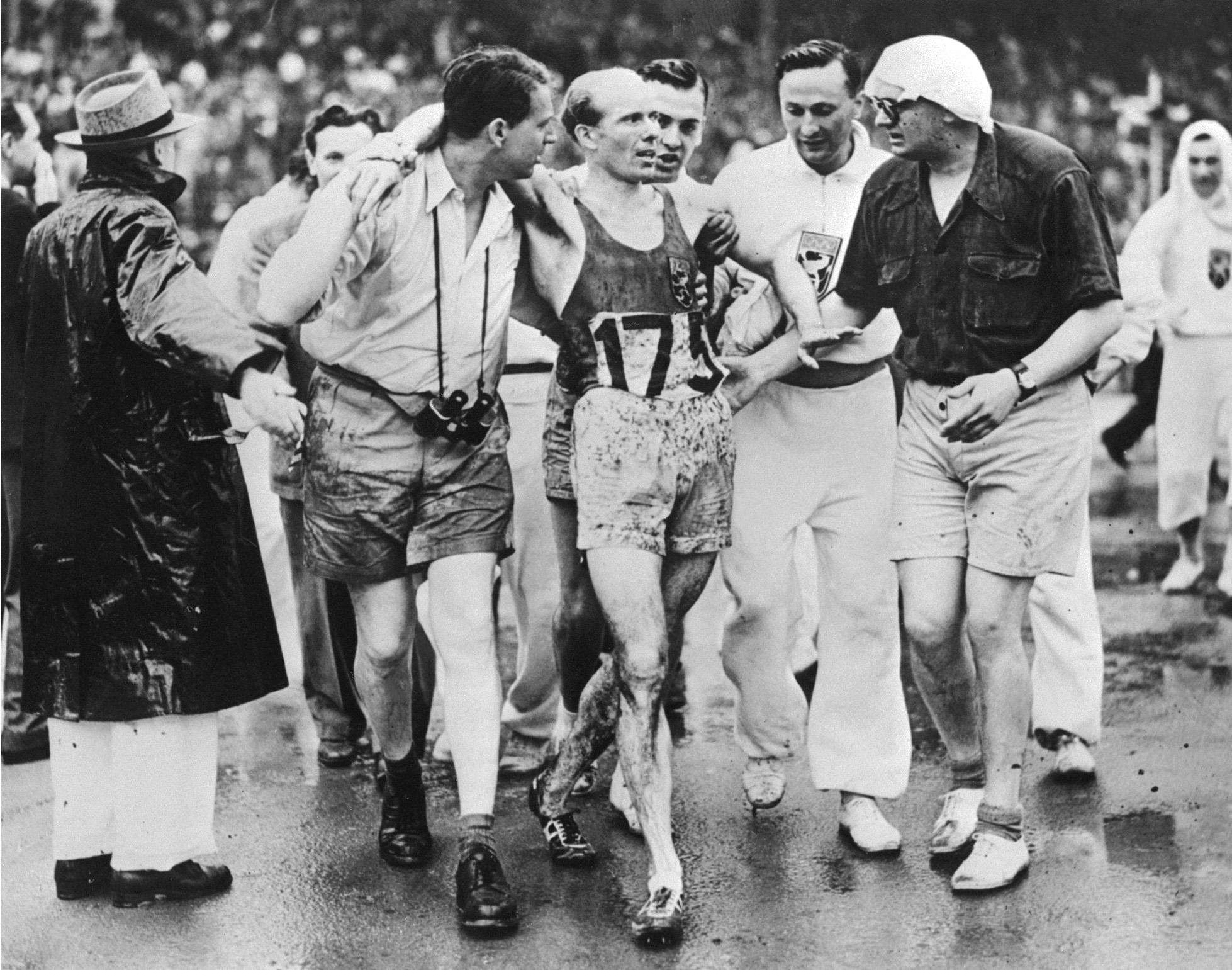 Due to being kicked out of the sport for transgressing the amateur rules, 1945 proved to be the final season for Hägg (world record 4:01.3) and Andersson, and Strand began to fulfil his destiny. In 1946 he won the European title in the year’s quickest time of 3:48.0, followed two days later by a world-leading 4:06.6 mile. He was the fastest miler again in 1947 (4:07.0) but that paled by comparison to his world 1500m record-equalling time of 3:43.0. He entered 1948 as clear favourite for the Olympic crown but nerves got the better of him and he only just salvaged second place, losing to Eriksson for the first time.

Strand, a talented pianist who released several jazz albums following his retirement from athletics in 1950, died in 2004 at the age of 82.

Finally, to the one woman in this group: Klavdiya Tochonova (born 17 November). Her distinction was to set a world record for the shot of 14.86m in 1949. The Russian would have been fancied for a medal at the 1948 Olympics, ranking third in the world that year with 14.16m, but the Soviet Union did not participate in the Games and victory went to France’s Micheline Ostermeyer with an Olympic record of 13.75m. How galling that must have been for Tochonova’s compatriot Tatyana Sevryukova who on the day of the Olympic final threw a world record 14.59m in Moscow.

However, Tochonova did go on to win two prestigious medals: silver at the 1950 European Championships and bronze at the 1952 Olympics. She died in 2004, aged 82.